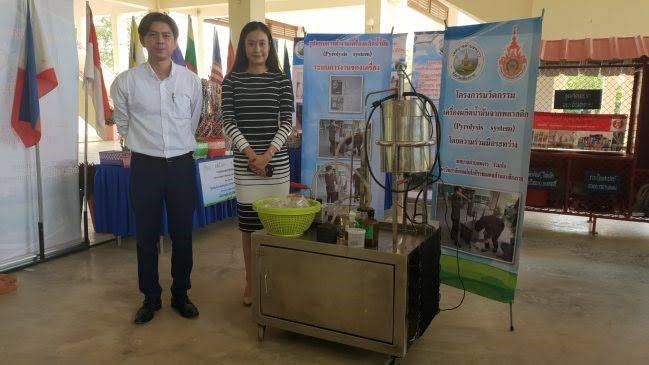 According to Pollution Control Department in 2013, Thailand is one of the countries generating “excessive wastes in the city”. Whereas Thailand has garbage nearly 27 million tons, there are only 466 sites of hygienic wastes disposal of the total 2,490 sites or only 19 percent. The other 81 percent or 2,024 sites were unhygienic wastes disposal. This causes the government of Thailand to set the waste problems to be a “national issue” in the agenda of the Pollution Control Department between the years of 2016-2021. The goal of the agenda is to manage residual wastes for “100 percent” or “no more residual wastes”. The unsolved problems of waste management are technology of waste management has low effectiveness and side effects to environment, and local community are lack of knowledge and understanding in the appropriate way to dispose wastes. Many people in community gather some hazardous goods; for example, batteries, light bulbs, chemical containers together which are not hygienic. This includes plastic wastes which are piled up and burnt causes air pollution and smog in summer.

The findings of the study in waste management in Phan District, Chiang Rai Province revealed that the waste management of Phan Sub-district Administration Organization has prepared the three-year development plan (2016-2018) in five strategies of the province that are natural resources environment development in integrity and sustainability. The project emphasized on waste management and waste bank. Moreover, Mongkol Srivichai, a professor in Civil Engineering at Rajamangala University of Technology Lanna in Chiang Rai Province has been in collaboration with Phan Sub-districct Administration Organization to cooperate in sustainability of waste management in Phan District and to operate the explicit strategic plans in waste management. This project attracts researchers who are interested to broadcast wastes management technology with Pyrolysis which makes fuels having silicon dioxide (SiO2) as a catalyst synthesized from rice husks to change and shorten the structure of carbon dioxide chain. This makes the oil is more effective. The Flue Gas Desulfurization (FGD) is also used to reduce the problem of sulfur odor in the process of plastic refining. The researchers hope to apply this technology and to pass on how to do plastic wastes management to community. It also includes the guidance in making oil from plastic refining which can use for the most benefits by using Pyrolysis. The Pyrolysis is the process of decomposing the hydrocarbon compounds in oxygen-free environment which are condensed into petrochemicals; however, oil from plastic contain a large amount of carbon and sulfur which results in non-standard quality of oil. The researchers have the guidance in synthesis of a catalyst by silicon dioxide (SiO2) and alumina from rice husks. These catalysts are acidic composing of metal sulfur which helps in bonding and sulfur removal at the same time. The results of the experiment found that crude oil is sequentially distilled by thermoplastic. The results of the process in Pyrolysis of rubber showed that plastic oil test found that the experiment in three stages of Pyrolysis found that oil from thermoplastic in Polystyrene (PS) contains a lot of oil at 96% of weigh and Natural Rubber: NR is the most at 40% of weigh and quality analysis showed that oil from polypropylene has the closet value to diesel with specific gravity at 0.83 kg / m3, viscosity at 20.75 cSt, flash point at 48 degrees Celsius, and turbidity point at – 5.46 degrees Celsius respectively. Nevertheless, the experimental and test are still prototypes which need to be developed and analyzed the quality of oil to be effective as oil obtained from standard crude oil refining and still in the process of study, budget, and planning in an explicit cooperation so that this research can be substantially seen in the future.