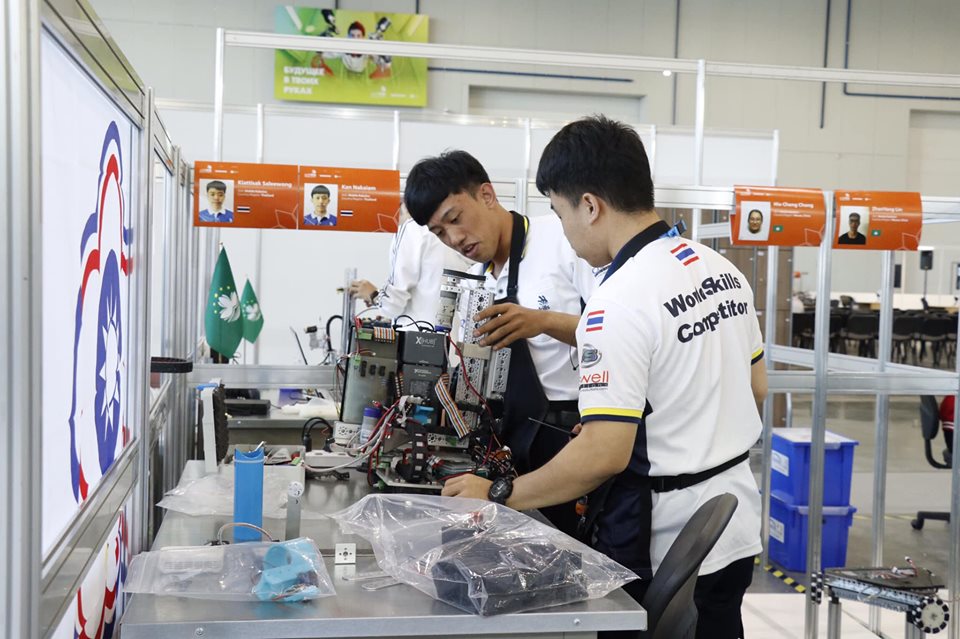 World Skills is the stage which gives students an opportunity to present their potential of labor skills development. The objective of labor skills development is to create a path of success to craftsmen. Students of Rajamagala University of Technology had an opportunity to attend the competitions more than ten years, and they were the representatives to join the international competitions (World Skills Competition) for four times. The students carried out many works and honor. Today, we are going to talk about those of their paths of success.

Mr. Jakkarin Tinnakorn, the lecturer in Mechatronics Engineering, Faculty of Engineering, was one of the founding team members.

Q: The beginning of encouraging the students to attend the competition

Q: How does the advisor support or encourage the students do to achieve their goals?

A: I always supported the students in all equipment for practice during the time of the rehearsal preparation. The most important points were that to give them encouragement and to find techniques and to help them practiced with new techniques. The students would have opportunities to try doing new things so that they could reduce chances of mistakes which could happen in the competition. I reminded the students to think of their goals and to extend experience from the competition to improve themselves in their works. They could also forward their inspiration to the junior students who wanted to follow their paths.

“Building the team of students for competition preparation was not easy. It required time and patience. We were not the expert ones, but we had to put an effort to build this team to achieve the highest goal. We wanted to see the day that our students standing on the stage and won the winner prize. There was the university’s logo showed on the top to announce that we were from RMUTL.”.

“The students joining the team were the students in my classes. The responsibilities were to practice, to understand what is the objective of the challenge, and to improve English skills. The students sometimes wanted to go out, to hang out with their friend, and to relax. Being a coach, I had to give them some advice and directions. I had to encourage them to see the success at the end of the destination. I needed to build up their confidence that one day they would see the paths of success clearer.”.

“Did I think of leaving the team? I confessed that there were many times that I was very tired and exhausted, but I reminded myself that I grew up and graduated from here. I had an opportunity to study and come back to work here because I wanted to make the reputation to the university. This was an opportunity that I could train the students and took them to attend the competition until they won the award. When the students walked to me and told me that they did it. I was very proud of them. They had been working and practicing so hard for a year. I was glad to be a part of their success. Being the project advisor, you must sacrifice your own time and own funds. However, it was worth to see the success at the end of the destination.”.

Mr. Pathipan Huangsorn, a representative of Mechatronics Major, winning the award for Mechatronics in the 43rd World Skills at Sao Paolo, Brazil, shared his experience to us that “In the competition, we had well-prepared ourselves. It was difficult that we would never know the challenge what we had to do in advance. All team competitors would know together on that day. That year was the first year that we were the representatives attending in World Skills. We did not have senior students who experienced in the competitions to share us the guidance and techniques. However, we did our best in the competition and we won the excellence award in Mechatronics from the competition. I was very proud of the award which I won it and could make the reputation for being a representative on behalf of the Rajamagala University of Technology Lanna. The most important was the value experiences from the competition which I could share to the junior students in the next generation. The junior students, who wanted to learn and experience the same as what we did, should pay attention to their practice, to be disciplined, and to be patient to keep doing what we did until we were expert. During the competition, there was no one could help us even though the project advisor who had been teaching us. It was only ourselves and our own experience we practiced to help us out. I believed that all of you could do it if you had your strong intention and determined effort. The success would definitely not be out of our reach.”.

Mr. Tarayut Kittiwararat, the lecturer in Mechatronics Engineering, Faculty of Engineering, was another important member of the founding team.

The stage of WORLD SKILLS is the stage to inspire self-development, learning, and attempt to show their potential for being skilled labors on the global stage. In the past, the students’ projects guaranteed that this educational institute still insisted on supporting the students to become the practical ones having expert in vocational skills. They would learn to broaden their knowledge and how to solve the problems. In the future, they will be important resources for the development of the country.

The winner in Education Branch in “The Project of...
ASIA STAR Awards: A Stage for New Designer to the...
Latest News
Category