Civil Engineering Department promotes “The Knowledge Management from University to Community” a solid waste management of Phan SAO, from a result to be a fact. 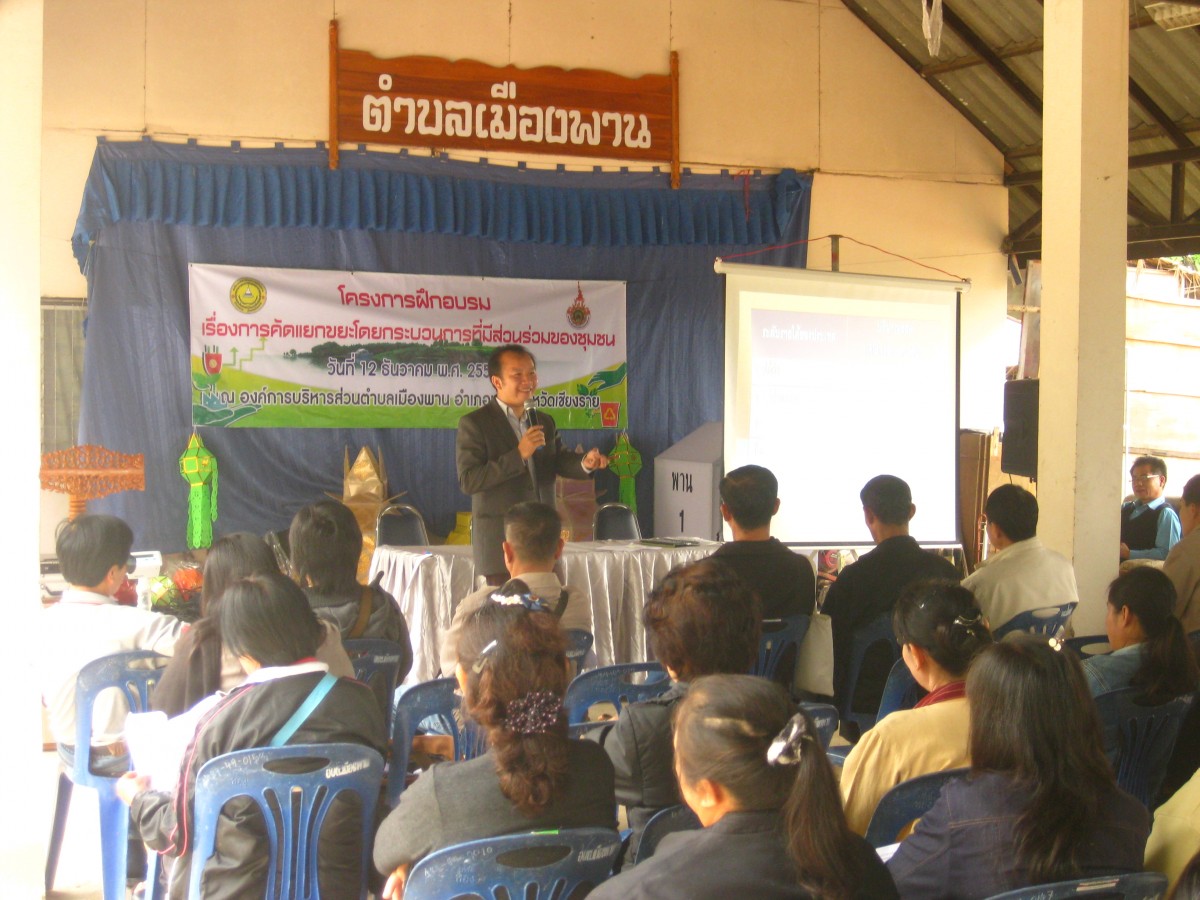 Waste, many people think that it is something that we do not need and throw away. The starting point of waste is from human routines, but nobody knows that where the end of waste is? Recently, we heard about a landfill hole burned in Samuthprakarn, and other waste problems.

Phan Subdistrict Administrative Organization (SAO) is one area where gets the waste problems. There is more 16,000 kilograms per week, and Phan SAO has to pay a big budget 2,500,000 baht per year for taking the solid waste to throw away in the landfill hole in Hod District, Chiangmai. From this problem, Civil and Environment Engineering Department, RMUTL Chiagrai joined Phan SAO to do a project for reducing amount of solid waste in Phan zone by RMUTL Chiangrai Teachers and students surveyed and found the factors of solid waste to plan and apply the problems into the Civil and Environment Engineering classrooms.

Dr. Mongkolkorn  Sriwichai, a lecturer in Civil and Environment Engineering Department, who did this project said that this project started since October 2013 by contacting from Phan SAO that they have to pay a big budget 52,000 baht per week for taking the solid waste from Phan District to throw away at the private landfill hole in Hod District, Chiangmai. And also, they may pay more money for the diesel and service of private landfill hole, which will be increased in the future. So Dr. Mongkolkorn started to do this project by integrating an Engineering project for solving this problem. The first step is started with separating the waste elements and finding the methods to remove or reduce the amount of each type of solid waste. He also finds a new suitable technology for this project. Phan SAO participated in activity of prototype community competition in reducing garbage based on the project Phan easiness with virtue praise beneath sufficiency economy. This project has three factors per a month and the processing in the first section is now complete, from January to March. The results demonstrated that M 9 ,Phakaw city won the award with M level and M 15 Phakaw Tongkaw also won the award with S level that reduced garbage from 1,096 kilograms to 350 kilograms per week.

Mr. Teerapong Wongsorn, a senior student in Civil and Environment Engineering, RMUTL Chiangrai, also said that he and his two friends did a Civil Engineering Project that is how to reduce amount of waste and find a new suitable technology in solid waste management for Phan SAO. They applied all Knowledge Managements from the university into this project. From the result, it is very useful for the community and it is a good method to apply the result of this project to other areas in the future.

Now, we have to accept that English is an important language and it is necessary for all countries used to communicate to others countries. The year is coming, in 2015, Thailand will be completely the one in AEC. And it is sure that Thai people have to get an effect that “English language” is an important weakness for them. Now, they lack of preparing language skills, which are one point that can make Thai people to have less a competition in labor market than other people in other countries. So the development of English language skills for Thai people is very important. Especially, the most students who will be graduated and prepared into the labor market, but they still lack of language skills because they do not practice their language skills long time. However, AEC charter (34) specifies that English is a working language in AEC, it means that people in 10 AEC countries have to use English for communication.