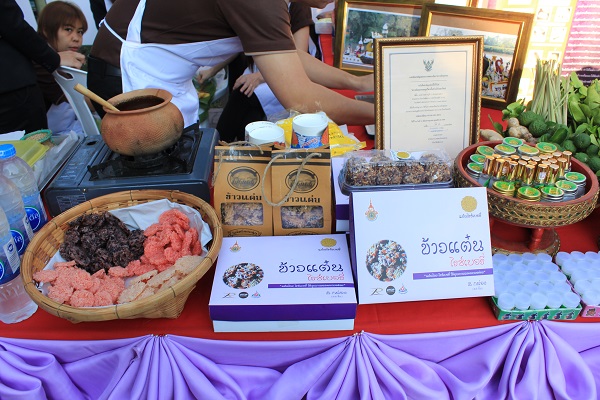 Berry rice cracker was discovered by staff of improve life quality project and local wisdom of Pong Dang villagers. Mr.Peerawit Chaimala‚ the project manager of converting rice into rice cracker by using local wisdom stated that berry rice cracker was developed according to the project of improving life quality which aim to honor 60th of Her Royal Highness Princess Maha Chakri Sirindhorn‚ in Pong Dang Mai Village‚ Village Number 12‚ Sai-Khaw Sub-district‚ Phan District‚ Chiang Rai Province. Rajamangala University of Technology Lanna Chiang Rai supported this project which the area is near Phan District‚ also it has a highest number of rice agriculture. Most of the villagers are agriculturists who have low income and in debt. This is common for farmers and agriculturists in other places‚ due to less amount of products and high cost of production which cause poor quality of rice and low price products. Mr. Kanta Kaewkul‚ Head of the village‚ who participated Bank of Agricultural project‚ received berry rice seed which was farm school project of Phra Maha Wuttichai Wacharametee. Head of the village and the students in Rajamangala University of Technology Lanna Chiang Rai planted berry rice seed by throwing rice seed then harvested by using local wisdom which converted rice into rice cracker. New theory that was discovered by the villagers was the mixture of sticky rice and berry rice to make rice cracker which was a snack for Northern Thai people. It can be used as a souvenir. Rice berry cracker was made by mixing rice berry with sticky rice‚ then dried in the sun. Do not dry with too much sun. Therefore‚ Rajamangala University of Technology Lanna Chiang Rai considered Pong Dang Village as the area for improve life quality project from 2013 to 2015 which causes the strength community. The nutrition of rice berry is high anti-oxidant such as beta catotine‚ gramma oryzanol‚ vitamin E‚ tannin‚ zinc‚ and high folate with low sugar index. Its bran has high anti oxidant which is good for cancer preventing. Berry rice consists of omega-3 of 25.51 mg/kg‚ acid which is useful for brain‚ liver‚ and brain‚ also decreased cholesterol. Zinc for 31.9 mg/kg is useful for synthesize protein‚ collagen‚ acne care‚ and prevent hair fall. Iron for 13-18 mg/kg help hemoglobin and enzyme that produce oxygen. Its fiber helps to decrease cholesterol‚ heart attack‚ digest‚ and excretory system.