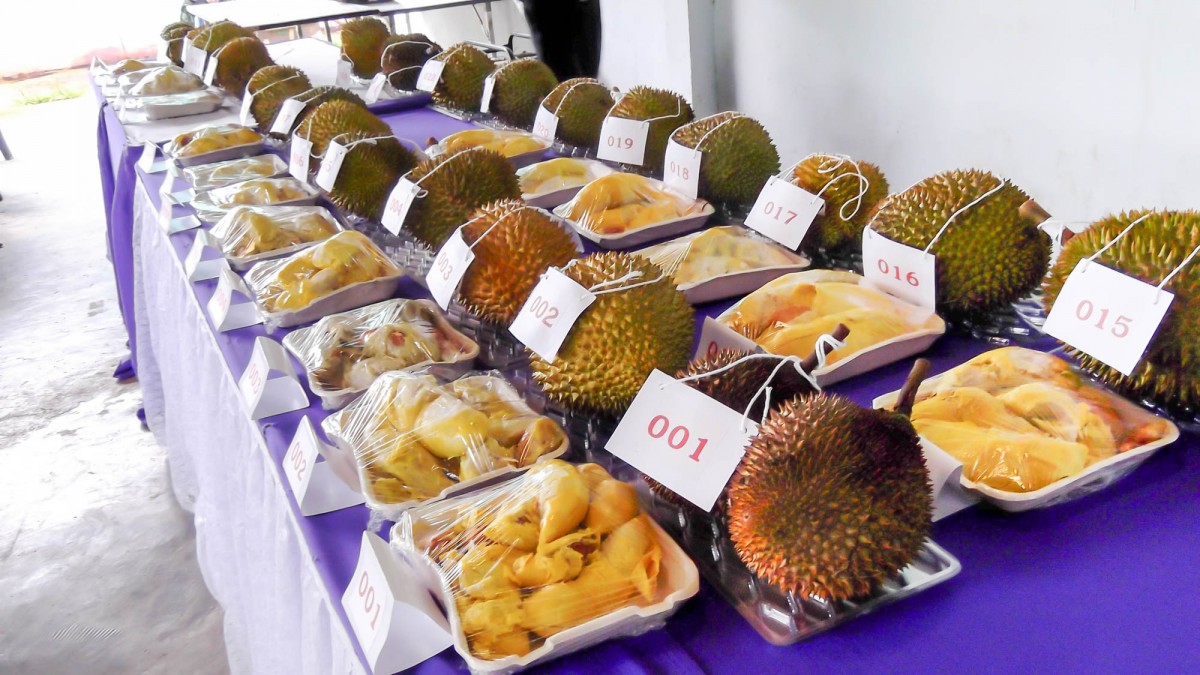 "Durian, the King of fruits", the words we often hear each other for a long time with all external characteristics as the King's Crown and similar meat that tastes delicious hard to find mangosteen. Durian fruit is light yellow color, texture. It has a sweet taste. Prices of durian are depending on species or expensive fruit is very popular in Thailand and foreigners because of the unique taste and aroma, which some say aroma, some people might say that stink. There are also many benefits can be made practical.

Plant genetic conservation project came from Her Royal Highness Princess Maha Chakri Sirindhorn Durian has been designated as one of the plants traditionally conservative Her Royal Highness Princess Maha Chakri Sirindhorn the old garden bar, Nonthaburi There are many old trees such as durian, some species may still look good, but these will be changed to park so that those plants will be gone by Horticulture Research Center Chanthaburi. Horticulture Research Institute. The Department of Agriculture responsible for programs in the preparation of the plaengonurak genetic varieties collected and Durian from Thailand, important throughout the country currently operates a durian fruit in the form of plant conservation work with agencies engaged in research related to fruit throughout the country and in 2559 joined with BEDO a meeting of the policy-driven and action plan for the conservation and use of fruit in the whole country together in order to safeguard the interests of the country and people of Thailand and the ownership of the resource requirement San Na Ngo Ya  in effect, when this past October 13, 2557, leads to potential development in the future, Thailand's Durian.

A preliminary survey found a species of durian is grown in indigenous areas, Mae Chan, Amphoe Umphang, which has more than 100 years of age, the durian trees up to the steep hills and there are cheap by RMUTL Tak Recognizes the importance of such projects, participate in research networks with Durian and stories is to collect such information. This is why we have exploration and genetic conservation plan folk in Durian Tak. For guidance on how to carry out research projects by Her Royal Highness Princess Maha Chakri Sirindhorn the purpose is to promote the conservation of native fruits from Tak province to study the processing of products and take advantage of the durian, and to study the propagation of native varieties of Durian in Mae Chan sub-district, Amphoe Umphang, Tak.

After preliminary surveys of RMUT Tak tournament contests with local Durian House Peng khloeng under the said project On June 14-15 2561 cooperation of the Office of agriculture Tak Mr. Umphang and Peng khloeng villagers for the purpose of qualifying the durian varieties best folk of the village of Peng khloeng for use in genetic studies of folk and durian is to promote the conservation of local varieties of Durian. The results of the contest were the winner, durian varieties best folk of the village khloeng and Peng, after this committee visited the durian trees to receive the award with development, with the conservation of indigenous species of Durian Tak next request.

Durian varieties selection of local seems to be a good opportunity, the durian is a native species of Tak province, and in the future will be a source of production for export as well. Meanwhile, farmers in the area also have to Tak province turned to garden, durian, along with the next species conservation.