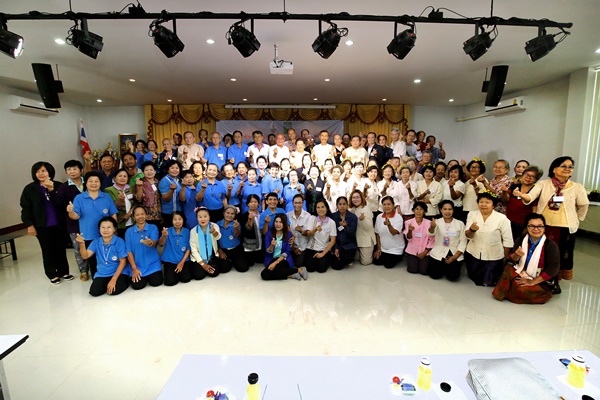 Teacher Yuratorn Jeena, Faculty of Administration and Liberal Arts, Rajamangala University and Technology Lanna, held the “Improving Ability Program for Elder Leader” to enhance the quality of elder life at “Funeral Service of Elder Association Nakornping” meeting room, Elder School Chiangmai, Don Kaew District, Mae Rim, Chiangmai. It was in honor of Mr. Manus Khunsai, Vice Governor of Chiangmai, to be a president for opening this program on November 7th, 2018.

This program was held on November 7th – 8th, 2018 for improving the ability of elder school leader in Chiangmai and enhancing the elder society. The leader group will learn about managing the elder school by Chiangmai Provincial Social Development and Human Security Office in the topic “Situation and Preparing for Elder Society in 21st century”, and “Managing the Elder School in Thailand 4.0 era”. There were 8 areas of elder leaders including Mae Faek Mai, Mae Jo, San Na Meng, Mae Sa, Rim Nuea, Chang Phueak, and San Pong. There also were agents from Department of Local Administration, Municipality Administrative Organization and Sub-district Administrative Organization. Moreover, there were more than 150 agents from 4 Health Promoting Hospital.

“The number of elder population increases rapidly and is facing the changing population structure (Elder Society). Thailand is one of the ASEAN countries which becomes the elder society fully so it effects to the government to set the measures for supporting the elder. The measures is set in the 12th National Economic and Social Development Plan. I expected that every leaders will apply to use for improving the elder life in their society. After that, the researcher will make the manual for improving the elder life quality, happy elder school, and the research study for presenting to the related departments.” Teacher Yuratorn said.