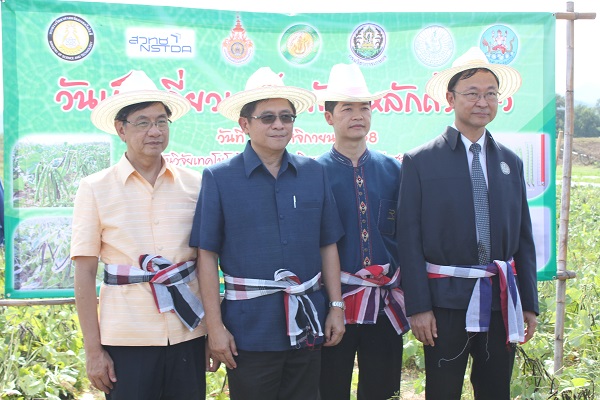 Rajamangala University of Technology Lanna has joined forces with The National Science and Technology Development Agency (NSTDA) of the Ministry of Science and Technology in holding ‘The Mung Bean Seed Harvest Day’ as well as opening ‘The Bean Seed Production Community Center’‚ in order to fight drought and propagate mung bean seeds‚ which have been given to the local farming community.   On November 8‚ 2015‚ the Agricultural Technology Research Institute of RMUTL collaborated with NSTDA and Kasetsart University in organizing ‘The Mung Bean Seed Harvest Day.’ At this time six new species of mung bean crops had reached maturity and were ready to be harvested. The six new species of mung beans were planted in seven rai (one rai equaling 1‚600 square meters)‚ and each rai produced one ton of harvestable mung beans.    In 2016‚  the organizations involved in this project aim to give seeds from the six new species of mung beans to farmers across Thailand‚ to be grown in 500 rai in order to increase the income of both the local farmers and mung bean processing companies. Additionally‚ the seeds of the new species will be given to other related organizations who wish to collaborate with Thai farmers in order to cultivate further mung bean production.   Dr. Pichet Durongkaveroj‚ the Minister of Science and Technology‚ opened the Harvest Day ceremony‚ which took place at RMUTL Lampang. He was welcomed by Director-General of the Department of Agriculture Extension‚ Dr. Passawat Wacharadumrongsak‚ the vice president of RMUTL‚ the vice governor of Lampang province‚ and the director of NSTDA.   The New Mung Bean Seed Species Production Project was began as a collaboration  between NSTDA‚  the Department of Agriculture Extension Organization‚ and a group of farmers who attended the pilot project to produce new seed species in Uthai Thani province‚ which has been the main source of mung bean production in Thailand. The project was later expanded when seeds were given to farmers from other provinces. Furthermore‚ the Department of Agriculture Extension have used the Bean Seed Community Production Center as a dynamic strategy to promote and support seed production from 2012 to present. There are currently 160 centers throughout Thailand. The action plan of the Bean Seed Production Center involves groups of famers who produce quality seeds during the rainy season‚ which are then distributed to the other farming groups to be planted in the dry season.   Dr. Pichet Durongkaveroj said that “In order to serve the government’s policy called ‘Super Cluster‚’ the Ministry of Science and Technology has planned to create a project called ‘the City of Food Innovation‚’ where there are many domestic and foreign research institutes cooperating in research about food‚ and international food distribution‚ which will lead to an increase in farmer’s income.”   Mung bean seeds are currently considered the leading solution to Thailand’s water management. In 2016‚ it is expected that Thailand will draught. The main factor in managing this problem is having alternate crops which have a short harvesting time‚ thus using less water to produce.   Dr. Pichet believes that local entrepreneurs and farmers need to work together in order to process new mung bean products which have not yet been seen on the market. He says that further research may be necessary to continue the development of these products. He suggests that an increase in mung bean products on the market will lead to an increase in mung bean demand‚ which will result in less water consumption. “Although mung beans are very small‚” Dr. Pichet concluded‚ “They have many benefits.”   Dr. Pasawat Wacharadumrongsak‚ Vice President for Research and Technology Transfer said that RMUTL sees the importance of producing high quality seeds to distribute to farmers‚ and that this is the reason behind the project. The university has assigned the Agricultural Technology Research Institute of RMUTL to manage the project‚ because this institute already has the staff‚ academic knowledge‚ and the areas for planting. This project‚ which is run by RMUTL‚ receives its funding from NSTDA. “In order to support the government’s policy‚ six new species of mung bean seeds were created and planted in seven rai from September to November this year‚” Dr. Pasawat said. “This project is now culminating today‚ at the Mung Bean Seed Harvest Day.”   The Mung Bean Seed Harvest Day aims to be the alternative choice for farmers during the current and possible future drought crises.

The collaboration between RMUTL‚ NSTDA‚ educational institutes‚ and government organizations supports the creation and production of new mung bean seed species‚ as well as their distribution to farmers‚ which will result in an increase in local farmer’s income.