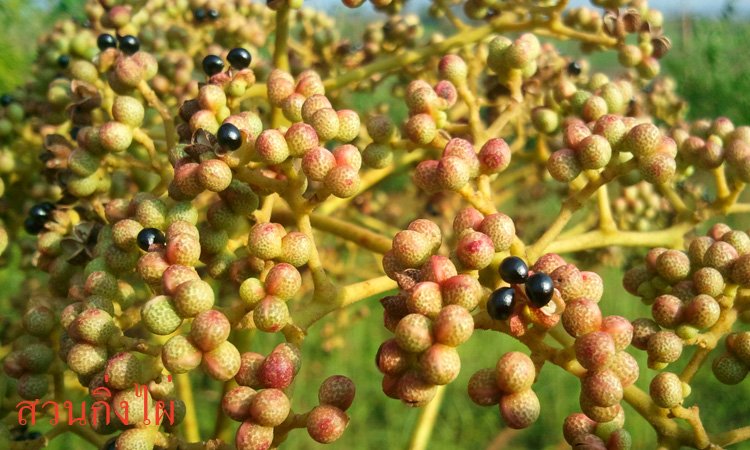 Food is a reflection of the lives of local people, raw ingredients indicate the identity of cooking as if it is an art of mixing and blending diversities together into a fine cuisine. A way of life inherited from generation to generation, so it is not surprising that the food of each region is varied. This is due to the availability and limitation of ingredients in the community. Northern Thai food has been popular and well-known, it has distinguished itself with the uniqueness of tastes which is a mixture of local spices. The ingredients can be easily found in local vegetable markets. “ Ma Khaen” is one of the spices used in the northern Thai food recipe, it gives a hot flavor to the dishes with unique a taste and very appealing aroma.

The name “Ma Khaen” is only known in the Northern region but officially it is called Sichuan Pepper (Chinese Pepper) mostly found in northern Thailand. “Ma Khaen” grows well in evergreen or evergreen forest. It is a perennial plant which grows to 10-25 meters tall. It gives a small red fruits during September to December and become darker when it is ripe. The fruit is brown, dry and quite rough. When it is ripe, it cracked open and expose black seeds smelling like lemon and kaffir lime. “Ma Khaen” has unique aroma and give slightly hot taste. This plant mostly grown in the northern Thai region which people use them for cooking as the main spice. However,due to the current change in the way of living. Cooking is more complicated for the new generation, so people prefer to eat out or buy available cooked food. Ajarn Busaba Manosan and Ajarn Jirarat Chantakoo, Lecturers in agriculture engineer program have developed a new product, bouillon cube in Ma Khaen flavor.The idea of this product arrived from a research on the consumers’ demand in Nan. They developed four different taste, then piloted them with the sample to select just one recipe and proceeded forming the cubes. After that is the process of calculating the ratio of the dissolution and eventually examine the chemical composition of the product and produce soup cubes.

Ajarn Busaba Manosan, the researcher, explained the origin of this product that it is from a group of researchers in Nan who found that Ma Khaen is widely grown in the province and commonly used for cooking by all the household, having Lanna bouillon cube like those available in the supermarket would be a good idea. The process in producing the Ma Khaen bouillon cube is quite simple. There is a mixture of dried ingredients and they are formed into cubes.This cubes therefore help to reduce the complication and time taken in searching and shopping. This cube had been also tested, improved and adapted to suit almost all Northern food menus and most importantly, it is very convenient for the people to use it in cooking. In addition, the research group has been supported by national research committee in developing the product package and other product extensions. The researchers have also currently registered a patent for this new product invention.

The achievement happened due to the environment observation and knowing how to add and expand value to it. From a local plant can be turned into a product which can be actually used, this can encourage the villagers to earn from what they already have in the community. Most importantly, this product is becoming well-known and accepted by the food lovers in Thailand.

7 postures to get a six- pack, flatten belly, Fit ...
RMUTL students have been awarded the National...
Latest News
Category